Showing posts from 2014
Show All

November 24, 2014
Christopher Hitchens said it best when he said that talking about the goodness of the church was distracting from the main question whether gods exist, or not. “it's a time wasting tactic” Yet, whenever the subject of taxing the church comes up, people use it as a counter-argument. Let's look at the “good” the church actually does. Parochial support for affiliated charities. Direct financial support to affiliated charities. Giving people hope * . * IMO the hope (of heaven) the church provides is annulled by the fear (of hell) the church instills first. As atheist say; The church provides an imaginary cure for an imaginary disease. I can't estimate the amount of money parochial support translate into. Suffice to say that the churches own buildings and these would be unoccupied or under-occupied without these Christian charities. Opening these buildings, apart from maintenance costs and electricity, is free and it's publicity. More on
Post a comment
Read more

What the fuck is Intelligent Design?

September 03, 2014
Update: Intelligent design is a creationist' scam as shown during the Dover trial. You can check-out the legal text here and the expert witness here Calling it as it is. Creationist leaders are scam artists (liars). They deliberately concocted the ID movement to get creationism taught in schools. If you are a Christian, according to your faith, lying is a "sin". Think about the lack of ethics of these people. End update - January 3rd, 2017 The original article below: I contend that nobody knows. According to IDelists I've come across with, other IDelists are wrong. It may be that I'm constructing a Strawman logical fallacy, but I think ID is deliberately constructing a logical fallacy of confusion. Here's what I understand. ID is against the scientific theory of evolution, because evolution doesn't explain abiogenesis. ID explains abiogenesis with an unnamed designer, either supernatural or … alien. ID does not accept evol
Post a comment
Read more

August 18, 2014
I've had a long convo with -a person who wants to remain anonymous-, a former Young Earth Creationist (YEC) about evolution (and religion, and abiogenesis, and morality...). This convo is ongoing with the exact same result; -S- returning to her default position of denial (of evolution) and affirmation (of creation). The latest development is that -S- is now a believer of Intelligent Design (ID); her beliefs have evolved (changed over time). She's not a Christian any more. I'm not sure if she's gone from YEC to Old Earth Creationism. It seems nearly impossible to convince -S- that evolution is possible, probable and, in fact, a scientific fact. Still, one can only try :-) and try, and try, and try again. The thing is that -S- needs to look at evolution from a different angle because she has been bombarded with creationist' propaganda that she chooses to believe over the biologists' evidence. How can you convince someone who believes the ea
6 comments
Read more

July 22, 2014
One of the recurring arguments theists use is 'We have faith'. This is a strange, seemingly unassailable position. The word 'faith' means 'to believe without evidence'. The point is that 'the absence of evidence is not evidence of absence'. This may sound convincing, to some, at first glance (and second, and third), but if examined closely, the argument fails utterly. First of all, if there is no evidence, why should one religion be chosen over any other religion? In other words, maybe a deity exists, but how can anybody claim its name is Yahweh, Jehovah , Allah or Vishnu (let alone, Zeus, Thor or Ra...). To have faith in the deity of someone’s parents, or of their own choosing, seems to be quite arbitrary. Secondly, and this is the main issue, there is evidence to the contrary. The 'holy' books (Torah, Bible, Koran or Bhagavad Gita) all contain creation stories that are in conflict with current scientific knowledg
Post a comment
Read more 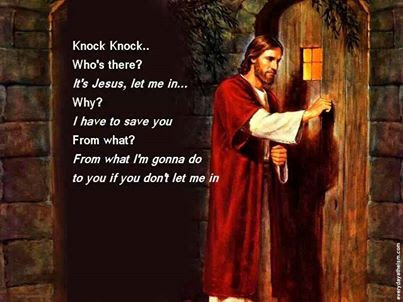 After debating with religious people on Twitter for a number of months (mostly Christians, some Muslims and a few... stray bullets), I thought to myself that all arguments for gods are based on flawed logic. A short convo confirmed that, indeed, my fellow atheists on Twitter believe the same. This is a short list with the most common logical fallacies I've encountered. This post will be updated to incorporate new fallacies when they present themselves. The Fallacy Fallacy Warning: Using flawed logic doesn't mean that your conclusion is necessarily wrong, it just means that you cannot base your conclusion on that logic. Let's think about an example to clarify this. Suppose you are going to visit your family, and they ask you at what time you'll arrive. You take into account the inevitable traffic jam and estimate an hour. Then, you step into your car and lo and behold, there is no traffic jam... but you get a flat tire. You arrive at the estimat
7 comments
Read more
More posts